Hello friends, it’s a substitute writer again. Lincoln is home from his weekend at the cabin with his Dad, and I’m away and missing my family; two, three, and four legged (not necessarily in that order, sorry to the hubs).

When I’m away from home, which is far too frequently, although I enjoy the quiet time at first, I always, always miss being at home with my brood. It’s inevitable that I begin to contemplate all I’ve done or haven’t done, and all the difficult decisions I’ve made in the face of complete and utter confusion and disbelief.  I can’t help but mentally avoid the tally of money I’ve spent, not only on Lincoln, but on the other geriatric wards we’ve taken in as well.

When Beau died last month, we no longer had to buy his Amantadine, Gabapentin, Rimidyl, Tramadol, Soloxine, Adequan, Glucosomine, and Fish Oil. No longer did I spend hours making the homemade dog food we fed him so he could eat a decent quantity, and still keep his weight down (so important for a double hip dysplasia dog). The days of bathroom assists were over. Our feeding times became quick and uncomplicated.

We hated how quickly breakfast and dinner were over, and longed for the lengthy process of pouring food and confirming medications, during which time our white dog would spin in circles and head-butt you with delight and impatience and glee. He lived with us for less than four years but became as much a part of our family as any dog ever was.

We learned that enthusiasm and zeal can make up for just about any physical disability.

Beau was a link in my learning chain. They all have been, really. These old dogs who lived another life, about which we knew nothing, who still manage to integrate and accept, and most of all, love their new life and their new people.

I’ve learned believing in the future is possible.

And always, always, my circle brings me back to Lincoln. My money pit. My canine 401 K. If you can believe it, somebody once had the audacity to tell me that I couldn’t say that he was a retirement plan, because one can expect a return from their retirement. This statement is obviously predicated on the belief that I get no return from my investment in Lincoln. Laughable, isn’t it?

I spent tens of thousands of dollars on my education. My law school loans may never be paid off. I learned an incredible amount during my formal education process. I’ve learned even more as I apply that education to the world of criminal prosecution. I love being a public servant. I think that my unending quest for fairness and justice is what brought me to rescue the dogs.

I learned that it is unspeakably important to be an advocate for those without a voice.

I don’t know how much money I’ve spent on Lincoln. Probably I don’t know simply because I don’t care. I’ve learned more from Lincoln than I have from anything else in my life. I now know that it really isn’t over until the fat lady sings. I’ve learned that it truly isn’t about if you fall; rather it’s about having the courage to continue to get up when you do.

Surgery after surgery, Lincoln gets up, shakes himself off, and perseveres. Amazingly, he not only perseveres, he does it with an endless smile and with an immeasurable amount of dignity. He is unflappable and utterly irrepressible with a constant wag of his tail and spring in his step, because each new day will bring him joy; a new smell, a scratch, a swim, a cuddle, a bowl of food; a stranger who becomes a friend.  No matter what this world throws at him, he becomes better, because he continues to grow. It is my greatest hope that I am strong enough to be more like him.

I’ve learned that I learned a lot from a big, red, three-legged pound dog.

(This is a video I made after Lincoln lived through the brain surgery. It’s not CometDog worthy, but it does illustrate my point). 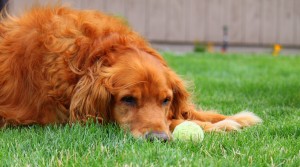 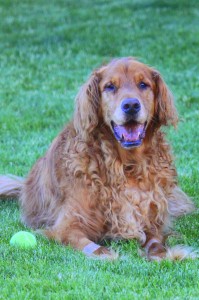