Submitted by Lincoln’s Mom, not for the faint of heart.

I was gone a lot during November and December. Lots of work travel, some family time away from home, and lots of busy work in between trips. It’s been crazy at work ever since then. Long hours, day after day. It’s dark when I leave for work and dark when I get home.

During that time, Lincoln took advantage of all the extra time with his Dad. Much of it was one on one, since Quinlay wasn’t with us yet. They’re pretty much inseparable now, Lincoln and his Dad, I mean. They go to the driving range nearly every day. Lincoln goes with Kirk pretty much when ever he gets in the car. Kirk has taken over both feedings, since I’m not often home in time for dinner. 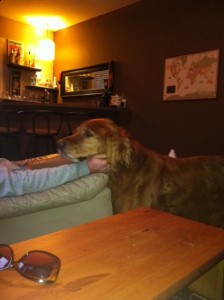 I’m not going to pretend that it didn’t sting. Lincoln had always been my dog. You all know what I mean, right? We’re a family, of course, but Lincoln came to me first. I found him at the pound and rescued him. It was up to me to make the final surgery decisions, so I have held his his fate in my hand far too many times. He was my dog, even as he was ours. He was my responsibility. It was an awesome and profound and bottomless commitment.

At some point during the month of December, I realized that Lincoln seemed to be relying more and more on Kirk. Lincoln went to him first for attention and looked to him for both love and rough-housing. I frequently felt a bit superfluous.

I didn’t fight it. Not one bit.  In fact, not only did I not fight it, I even encouraged it.  Somewhere deep inside me, in the awful, toxic, gnarled places that I try to deny even exist, in those places, I was relieved. I was being abdicated of my responsibility to him. Never one to shirk my duty, it was a relief that Lincoln had made the decision on his own. I hadn’t even had to put up any defenses or push him away as I had done to many a boyfriend. It had happened in spite of my love, or perhaps because of it. But either way, to Lincoln, the sun no longer rose and set on my shoulders. Kirk had become the person upon whom Lincoln relied.

Love is a tricky thing, as we all know. Loving a dog, especially one with cancer, can be an especially intricate conundrum. When Lincoln, in all of his dog simplicity, was drawn to the available and present person, I saw the chance to save myself. Without even a moment’s regret, I withdrew from contention. I had been given a chance at an emotional preemptive strike, and I was ready to take advantage of it.

Still struggling with all of the December losses; January’s one-two punch of Fortis and Comet has left me on the mat. Being a logical creature, I reasoned that each day that Lincoln lived, brought him one day closer to his death. Maybe my distance, often physical, but certainly emotional, would save me. Maybe if I stopped loving him so much, I would avoid the obvious personal devastation which would follow his death.  Intellectually, I reasoned that my remoteness would be my salvation.

And yet instead of being liberated and emancipated, I was lost. I felt weightless and hollow and light as a feather. I didn’t have anything to anchor me to my life. My emotional side fought back. Despite my purported intellectual clarity, it was dismal and murky and conflicted in my heart.
One night I was watching Lincoln revelling in his Lincoln-ness. He bounded after his ball, and squeaked his juju toy while simultaneously throwing it across the room so he could chase it. I had the sudden realization that love cannot be dictated or controlled or rationalized.  Real love will not betray you, even if you try to betray it. Love like Lincoln’s is uncomplicated and easy and true; it is as pure as the sea, and it isn’t predicated on absence or presence. It just is.
Love can deliver you from just about anything, even when its physical presence is gone. Love, even if it breaks your heart, will save you in the end.  It is honest and uncalculated and amazingly uncomplicated, especially when offered to you by a dog. Canine love isn’t motivated by money or things; it is only motivated by love. With a dog, love begets love.
In the end, the promise of death is a small thing when you compare it to a life lived very, very, large. In the end, love doesn’t bind you or enslave you; instead, love sets us free by giving us the strength and the courage to rejoice and remember.
There is no remedy for love, but to love more, said Henry David Thoreau. I think that guy really knew what he was talking about. 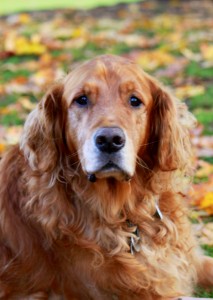