somebody stole my leg.

After my big night of being the movie star, I slept the sleep of the innocent, and woke up to see that everyone besides me was eating.  Obviously, this isn’t my first rodeo, so by now I know that when everyone else eats and I don’t, there is usually something fishy going on.

This was no exception. After breakfast (for everyone else, that is), I got loaded in the car and before I even knew what was happening, I was back in the same parking lot at the same old hospital. “What now?”, is all I could really think. My Mom seemed extra sad today, and if I’m being honest, my Dad seemed pretty sad too, and he’s usually a pretty tough read. This made me extra concerned considering that he usually doesn’t act worried.

So, we go in to the vet, and after we check in, I see my old friend Dr. Sanders. He’s my neurologist, the one who took out my encapsulated tumor, and basically saved my life. I really like him since he’s been nothing but good to me. Dr. Sanders came over and gave me some scratches, and I did what I usually do, which is flip right over onto my back and put all of my legs up in the air. He stayed with my Mom and Dad for a bit, and then said to me, “Lincoln, it never ceases to amaze me how one single dog could be so unlucky, and yet so lucky, all at the same time.” I took this to mean that I had had some pretty bad things happen to me, which was unlucky, but at least I had my Mom and Dad who kept giving me a chance. Over and over and over.

Trust me, I know that this is lucky, but it just goes back to what I’ve been saying since the beginning. Me and my Mom, we saved each other. Now don’t get me wrong, I know I’m especially lucky to have her, because let’s face it, not many people would put more into their dog than into their 401K, but she keeps doing that, year after year, and she doesn’t even seem to mind. She says she has gotten a bigger return on me than she would have even gotten from the stock market, which really just makes my point.  Here’s the truth as I believe it to be – I give her purpose. I force her to believe in something. I make her love me every day, just by being me. She tells me all the time that I have forgotten more about living and loving than most of us will ever know and if people could emulate me, even a little bit, the world would be a much better place.

It’s sort of like this quote she told me once, “What we do for ourselves dies with us. What we do for others and the world remains and is immortal.” That was from some guy named Albert Pines, but my Mom says that it is especially true about me because I bring so much happiness into the world and make so many people smile. She says that I’ll live on forever in all the good things I’ve done and all of the memories I’ve created.

Anyway, back to my latest surgery…same song, different dance, really. I go to sleep, I wake up, and a different body part is gone. “What in the heck is going on?”, is all I can think, but I’m on some crazy strong drugs, so much so that I hardly recognize my Mom, and in fact, as I learn later, I was actually pretty rude to her. Evidently, not only would I not even look at her, I wouldn’t even touch her and I was acting all jiggy and agitated. At first her feelings were really hurt, but then she realized that all of those behaviors are actually common side effects of the pain medicine I was on. 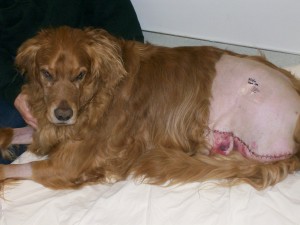 If I’m being honest, I hardly even remember that she was there and in the end, I’m pretty sure she didn’t take it personally. What I do remember is that she sang to me (which, as I’ve told you, she does a lot), and that finally that put me to sleep. She was singing “Death Cab for Cutie” songs, and even though she can’t really sing that well, the gist of the songs were that she would always be there for me. Of course I already knew that, so it wasn’t new information, but it is always nice to have some reconfirmation when you are feeling all drugged out and woozy. 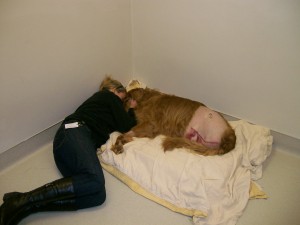 So, I stayed only one night and then got to go home, and if you can believe it, I didn’t feel too bad. My leg had really been hurting, and that pain was gone, but losing the entire leg was a little more than I bargained for. It’s amazing how well we can adapt, though. And I’m proof of that, as my Mom says, because I was up and around pretty much immediately.

In fact, in less than a week, I was rolling around and happy as can be. My leg didn’t hurt at all, which was pretty great. I was walking pretty good, if I do say so myself, and all seemed to be well. Every now and again, I would get a little irritated when my left ear was itchy, and I didn’t have a way to scratch it, but my Dad was paying extra close attention to that, and gave me lots and lots of left side scratches. My Aunt Robyn was super scared that I wouldn’t be able to do my side-to-side-entire-butt-wiggle-tail-wag with only three legs, but I got that balancing act down in a hurry, and I think you can all see from my video that I am GOOD TO GO.

My Mom and Dad kept talking about lab results and bone decalcification, which only mattered to me because it mattered to them. Other than that, things were pretty good. The vet had already told me I could still swim, and I was really starting to look forward to that. I just had to wait until my sutures were out, and once that happens, knowing my Mom and Dad, they’ll have me at the lake without delay. 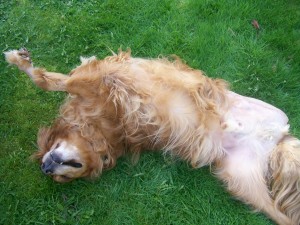 One thing I can always count on, is that they will do just about anything to keep a smile on my face and a wag in my tail (here’s hoping that’s not the next body part they remove; I’m pretty attached to my tail and all the attention it brings me when it’s in use). Please, everyone, keep your fingers crossed, and maybe mention to my Mom and Dad that it’s pretty important to me that I get to keep my tail.