That came from a poem that talked about herons and horses and solitude, and a lot of stuff, and at first all I could focus on was the heron (I am a bird dog, after all), but then I realized there was a deeper meaning in the other parts.  I interpret it pretty much like this…my Mom doesn’t wear hope very well. In fact, she wears it a little like a peon would wear a tiara…with great trepidation, very uncomfortably, and with a lot of distrust.
Here’s the deal…when I lived through my brain surgery, a tiny flicker something came alive in my Mom. I know that she thought I was going to die, and then, BAM, when I became the super-fantastic miracle dog, she sort of came around to my way of thinking, which is, frankly, that good things can happen. I’m here to prove it, right? I am a living, breathing, walking (it might be funny looking now, but it still counts), full-fledged MIRACLE. I heard her say that I embody hope, and if this makes her happy, then I agree; I do embody hope.
I think maybe one of my jobs is to make her realize that you can find hope in a lot of different places, and that you don’t always have to be afraid of it. Sometimes it can come in something as innocent and simple as your dog being able to swim again. Or the fact that your dog can walk up the stairs. Or even something as mundane as the fact that he still wags his tail so hard that the walls shake.  A while ago, just before she sent me in to my last surgery, she told me that her fear is born of love, and I took this to mean that if she didn’t love me so much she wouldn’t be so afraid about what’s going to happen to me.
I wish I could tell her not to be scared. At first, this was one of those times I wanted to be able to talk, but then I realized that words might just make the whole situation more complicated, and really it’s just as simple as love. I can show her that I love her without saying a word, so I climbed right up next to her on the sofa (even though it hurt my bad leg), and snugged in, with my head right on her lap. Sometimes she can be slow on the uptake, but not then. She figured it out right away, and in the end, I was glad I couldn’t say a single word.
So everyone, here we go again! My Mom and Dad were prepared for me to die. There really isn’t much hope that a dog will recover from osteosarcoma, right? I think that’s why we are having the Summer of Lincoln, in fact. But listen to this…we finally got my bone decalcification results back from WSU, and they couldn’t even find any cancer. At first I was a little freaked out by this, I mean, seriously, did they cut my leg off for nothing?
But then, as it was explained to my Mom (I was eavesdropping), they went back to my original biopsy and confirmed that indeed there were cancer cells in there, so the diagnosis stands. It turns out that my Mom may have been right about us catching this super early. Thanks to TPLO number two, I just may live. I don’t know if I told you or not, but that’s why we went to the vet so quickly when I started limping. My Mom thought something was wrong with my knee, so she didn’t delay, and that just may be the difference. Maybe that TPLO surgery and all it’s corresponding pain will be worth something after all. 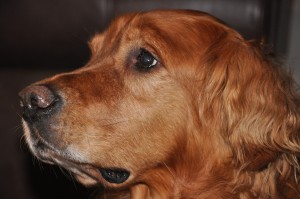 So, I’ve started chemotherapy (I have to have five more treatments). Honestly, the chemo doesn’t really do much to me, so I can’t even say that I hate it. I’m still eating (of course my Mom says I’ve always been a good eater). I’m still totally mobile. I’m not fast, but I can still move out if I need to, and I have the video to prove it. My Mom says that I “Totally Rock”, and if I’m being honest, I’m starting to believe her.
Just so you know, we’re still taking things day by day. My Mom says this is the best approach, and while she may not be as carefree as I am, she’s gotten me pretty far, so I’m going to stick with her. I can already go for walks, and everyone says I’m getting around amazingly well (to be honest, it’s mainly my Mom who says that, but I think it still counts). Check out my videos for proof, though, just in case you needed it.
Plus, it’s as I said, I really have to make my Mom realize that it’s okay to believe in hope. I mean really, who better to convince her than me?