That’s what I really want to know. I did great for about 8 months after the surgery on my left knee. It felt as good as new. In fact, I overheard my Mom saying that she thought that I may be ready to go running again. WHAT?!?!? This was almost too good to be true, because I had heard her say quite a few times that my running days were over. She kept saying that swimming was much better for me because it was low impact, and even though I understand that concept, I still got a little bit irritated when she would put on the running gear and head out alone. Some things just aren’t right, and running without a dog is one of them.

We got to go on walks though, and I definitely took advantage of that. It was nice to be out in the neighborhood again. Smelling all those old familiar smells, and enjoying all of the extra attention a big, handsome dog like myself gets whenever we are out and about. Sometime in February, my left leg started hurting again.  You’ve got to be kidding me, is all I could think. What else could possibly go wrong? My Mom told me I didn’t have any other ACLs to blow out, and that I was as golden as a golden could be. 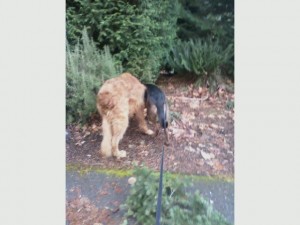 Also, we got another dog. Her name is Murphy, and she is only five years old. To be honest, it was nice to have another dog to run and romp with. Since my Mom usually rescues the old dogs that are going to be euthanized (I have really grown to hate that word), it was a new thing for me to have a dog around who could out-run me. To be totally accurate, it was new to have a dog that could even run at all, since the others can barely even walk, let alone run and play.

So anyway, Murph and I went for walks and we played in the back yard a lot. That was when I first noticed that my left leg was bothering me.  At first I thought it was just because I was using muscles that I hadn’t used in a while, but it started hurting pretty bad pretty quick. Of course my Mom noticed that right away, and before I knew it, we were headed back to the vet. She made them take x-rays to make sure that my knee surgery had healed up okay, but x-rays are a walk  in the park for me since I know the drill so well. They hardly even have to tell me what to do anymore, I’ve had so many of them. They sent me home with a clean bill of health. They said the plates and screws were perfect, and not to worry one bit. That was a good trip home, let me tell you, and what a relief. Earlier that week, I heard my Mom tell my Aunt Robyn that she was super worried about me. She said that she was real concerned that they were going to say that I had osteosarcoma.  Since that was a word I had never heard before, I really didn’t pay much attention. On top of that, it’s not like she’s clairvoiant, right? How could she possibly diagnose me?

Well, after we got sent home all happy, we got a real bad call the next day. After the x-ray specialist looked at my films, they had some concerns. Wouldn’t you know it, I was right back to the vet in just a couple of days. Honestly, if I had a nickel for every trip I’ve made there, I’d be one rich golden retriever. I had to have a biopsy, which the vet said would feel like a bee sting compared to everything I’d been through, and he was right, it wasn’t so bad, especially when you factor in how much my leg was hurting.

A few more days went by, and we got some pretty sad news. Wouldn’t you know it, my Mom was right (how she knew what was wrong with me, none of us will ever know, but she was exactly correct). It was bone cancer, and I was getting the distinct impression that it was not a good thing at all. Whenever I hear new words, I get pretty apprehensive. There was lots of talk of amputation and “good candidate” and surgery stress. Before you know it, my Mom’s pretty upset again, and spending lots of time on the computer instead of taking me and Murf for walks. I don’t like it when she cries, and there were some serious waterworks this time. I wasn’t getting a good feeling about my situation, but my Mom always says that I am the single most irrepressible creature she has ever known, so I was trying to live up to that and make her feel better by being my cheerful, carefree self.

One night, our friends came over and we had a photo session. Even though lots of people call me Clifford, and think I’m goofy, my Mom says I’m spectacular, and she wanted to memorialize me at every stage of my life. I was getting the idea that something pretty big was happening the next day (that “amputation” word was really flying), but I wasn’t too sure what it was. Anyway, I can be a big ham when it comes right down to it, so I posed for some pictures, and even I have to admit that I’m pretty photogenic. 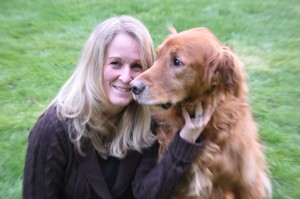 My Mom tried to stay out of the pictures, but I made it pretty clear that I wasn’t going to sit there and pose without her. Plus, if I’m being honest, I was trying to act pretty goofy again, because it seemed like she needed some cheering up. In fact everyone seemed a little blue that night.  I’m guessing it had something to do with me, because I sure got A LOT of extra attention that night, which I really liked. Unfortunately, I had seen my Mom sad before, and it was becoming pretty obvious that just like before, it was all because of me. A while ago my Mom had told me this saying that really hit home on that particular night…”Let your heart feel for the affliction and distress of everyone” – George Washington. This is something I can really relate to, because I don’t like it when there is a sense of sadness in the air. It’s pretty simple to me, I just want everyone to be as carefree as I am, so I do my best to spread lots happiness around.

Anyway, we had a lot of fun getting our picture taken, and I even ended up in a video, because the guy taking our pictures thought it was pretty funny how I refused to pose unless my Mom was there. I pretty much had to throw myself on her to make her stay, but eventually it worked. At first she wasn’t too thrilled, but in the end she ended up thinking the whole thing was pretty entertaining, and as you can see, I did manage to make her smile.

As I’ve mentioned, I feel that it’s my job to cheer my my Mom up. Frankly, I’m positive it’s one of my main objectives on earth. I think my Mom and I found each other at just the right time for both of us, and part of my purpose in life, is to make her believe in hope, and also, to make her laugh, and not just a little quiet laugh. I’m here to make her laugh OUT LOUD.

2 thoughts on “Why am I limping if they fixed my knee?”