Well, my Mom and Dad took me back to the lake this weekend.  It seems like they are sticking with their “Summer of Lincoln” promise, despite the fact that it’s starting to look like I just might live forever.  My Mom isn’t quite on board with the “live forever” plan, but I’m doing my best to convince her that it just could happen. Even if it doesn’t, there is this one song my Mom always sings me and one of the lines she loves is, “You were a truth I would rather lose, than to have never lain beside at all”. I take this to mean that no matter how this entire thing turns out, she isn’t going to have any regrets.

I think it’s sort of like this – she feels like what we have is worth everything we’ve gone through. But here is the deal, we’re going through it together, and it’s just like the charm she put on my collar just before one of my many surgeries, “Life’s journey has brought me to you, and we shall continue on together”. It sure looks like I’m getting better, according to everyone who has an opinion, including, but not limited to lots of people with lots of letters after their names, also known as my doctors.

So, remember how I told you that my Mom and Dad were making me wear a life jacket to swim? And how I hated it more than just about anything. And how I made fun of Fletcher, and that wearing that stupid life jacket was the worst form of karma. And how I ignored them when they tried to put it on me. Remember all that? Well, guess what I did to the supposedly intellectually superior humans? If your guess is that I tricked them and went down to the lake to swim unsupervised and unprotected, then YOU ARE RIGHT!

My Mom and Dad were out doing boring stuff in the yard, and of course, I was right there with them. After a bit I decided to head off to the property next door (pre-surgery, this is where I used to go for privacy when I had to go), and they just looked at me and watched me go. My Dad was pretty happy that there wouldn’t be poo in our yard, so he didn’t even think twice about me going over there. Incredibly, neither did my Mom, and since I was feeling saucy and had a little extra bounce in my step, I figured I would just make a little unauthorized jaunt down to the water and take a swim.

No life jacket and no people. Just me and the water. Just like the old days. It’s just like this one saying my Mom told me….”A lake is the landscape’s most beautiful and expressive feature.  It is earth’s eye; looking into which the beholder measures the depth of his own nature.”  ~Henry David Thoreau. Let me tell you this, I measured the depth of my nature, and it was amazing. AMAZING.

For a while, things seemed totally back to normal; just how they always were before. My Mom and Dad outside, doing stuff, and me just being one with the water. After a while though, I decided it was time to make my way back to the house to see how much trouble I was in. If I’m being honest, it didn’t really matter…any amount would have been worth it to feel as great as I did while I was in the water. 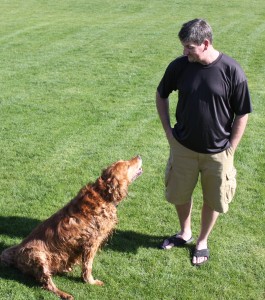 What you are seeing in these pictures, is the aftermath of my little solo swimming jaunt. I got the “hands on the hips” look from both of them. However, you’ll notice that I’m no dummy, I just went straight into my three legged roll because I know they can’t resist me when I put all of my remaining legs in the air and wiggle.

The good news is that after my display, my Dad insisted that I be able to swim without my vest. He said that if I was going to be sneaking down to the lake anyway, I might as well get some practice in while he was around to help me. You’ll see just how great I swim in the videos. Sometimes I even amaze myself. I’m still working on my balance, and my Mom says that my back leg must be getting stronger and stronger as each day goes by because I’m such a lummox, and it’s basically holding me up all on its own.

Isn’t it awesome…me measuring the depth of my own nature and becoming one with the water again. It’s just like this saying my Mom told me once…”Live like there is heaven on earth”. I’ll promise you one thing….I’m sure going to try to do that. Not just for me, but for her too. She needs that.

And Comet, REALLY?? A harp? I’m with Holly, a really cool string bass seems like a way better fit.