So, I have to have my knee fixed or there will be no more swimming and no more running for me.  Evidently I have to have a TPLO, which is a tibial plateau leveling osteotomy.  I have to have this surgery because I ruptured my anterior cruciate ligament and when dogs do that it’s quite a bit different than when people do that. For some reason, our ACLs can’t be repaired, so some doctor figured out a way to fix it in a different way, but it’s not easy. It involves bone cutting, and plates and screws and lots of stitches. The only good thing is that my Mom and Dad had been through this once before on our dog Peyton, so they knew what to expect.

I can tell you this – I sure didn’t. This one sucked. Big time.

It was nothing like the brain surgery, which was supposed  to be some big successful miracle surgery, but hardly even hurt, and made me so popular I could hardly believe it.  I mean after that one, I was like an instant celebrity… everyone loved me and touched me and thought I was all that. This surgery, on the other hand, or paw, if you want me to be clever, was the exactly the opposite.  I love my Mom and Dad and all, and everyone tells me how lucky I am, but to be honest, this time was nothing like the first one.

So, my Mom took me to the vet, and left me with some clothes to remind me of home, and just like before I went to sleep.  I was expecting the same thing when I woke up. And normally, I really like going to the vet. My Mom says they treat me like royalty, which makes sense since everyone tells me how majestic and regal I am. I guess they forgot how much they like me because this time when I woke up I HURT SO BAD. It felt like my knee was on fire, and believe me, right about then I was wishing I hadn’t ignored my Mom when she called me right before I hurt my knee. Turns out she probably knew best, and if I could talk, I just might tell her she was right.

I guess it makes sense that it HURT SO BAD considering what they had done to me. Plus, by this time, it was winter, and everyone kept talking about us having an “early snow”. Normally when I hear the word “snow”, I am ready to roll, but this time I didn’t even feel like moving.

Check out the pictures of the surgery, and maybe you’ll see why. 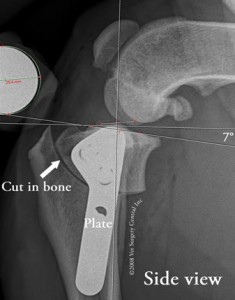 I had to stay at the vet for way longer than I wanted, but let’s face it, I’d been here before, and they all are so nice to me, so it could be worse. Even though lots of dogs have this surgery, and it’s not that special, they still remember me from when I was the “miracle”. In fact, my Mom has a “miracle” charm on my collar, and they think that’s 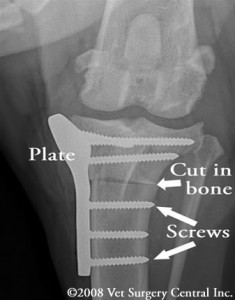 pretty neat and they all stop and give it a rub for good luck.  So after a few days, my Mom picked me up and we went straight over to the cabin. She figured that would be as good as place as any for me to recover, and I guess she was right, because during the winter that’s our lazy place, since there is usually snow, and there really isn’t much to do.

So, as you can see by the pictures, we did a lot of laying around, but it was not the same as my last surgery. Those doctors were right when they said there would not be “immediate relief”. Let me tell you something, not only was there not “immediate relief”, there was A LOT of IMMEDIATE PAIN. Now I’m no sissy, I’ve been through a lot at this point, but I can tell you this was not an adventure that I wanted to repeat. Seriously, take a look! Does this look like any fun at all? Especially considering I lost like two months of swimming because of a stupid ACL. Man, if I only would have listened to my Mom.

So obviously this recovery wasn’t that much fun. Not only did it hurt WAY worse than the brain surgery (which felt like sleeping with kittens, if I’m forced to make a comparison), I could hardly move, so I wasn’t getting as much attention from everyone. I couldn’t go to work with my Mom anymore, because of the stupid steps at her job, and I couldn’t walk around the neighborhood and get the attention and soft spot petting I was used to. When you get right down to it, this really bit the big one. 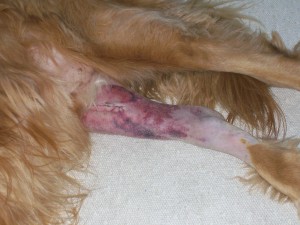 What I really needed to remind myself was that it was still way better than that life I tried to forget. Even though it hurt so much, somehow I know that my Mom and Dad did this because they love me.  So, I tried my best to get up and walk and let them massage my leg, and put that stupid ice pack on it, 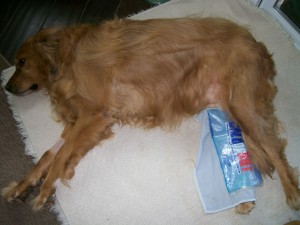 and hoped that next year, after all of this snow is gone, I would be able to swim again. Because, really, isn’t going to the lake for a cool dip on a hot day what every dog dreams of? 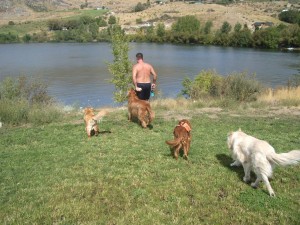