is what my Dad says when he is trying to convince us that something is no big deal. My Mom and I are on to him, though. We have both pretty much figured out that contrary to that saying, it probably actually is going to sting some.

So, I had the second knee surgery, and my Mom and Dad kept me on a pretty tight leash, and just I suspected, there was quite a bit of pain. Those first six weeks were hell, but after that, things started feeling pretty good. Plus, right toward the end of July is when things really start heating up at the cabin. And I do mean that literally. It gets HOT.

Do any of you have even the slightest idea how hot a big dog like me can get when the outdoor temperatures are in the hundreds? Especially when you consider this lustrous fur coat that I’m wearing. Plus, it’s right about this time that we start having family weekends, and vacation weeks, and lots and lots of friends coming to stay.

I’m sure you can imagine the type of friends we have, right? It’s pretty true that dog people hang around dog people, so every weekend there was pretty much a new behind to sniff. On top of that, don’t forget that our neighbors have four dogs running around too! By the time my FAVORITE AUNT ROBYN came, I was healed up and ready to roll. 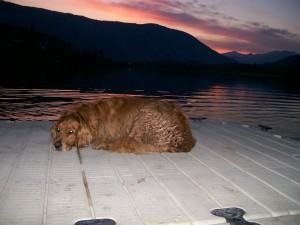 And good thing, because if I’m being honest, this is my favorite time of the year. It’s great swimming weather, and the nights are just beautiful. I’m pretty photogenic, if I do say so myself.

As good as I was feeling, we had some bad times too. I still wasn’t allowed to run with my Mom. She was going without me, and to be honest, even though I understood, I really didn’t like it much.  My brother Fletcher was getting pretty sick, and he was occupying a LOT of my Mom’s time. We had only had him for a few years, because my Mom got him from the shelter. She says “just in the nick of time”, because he was going to be euthanized. That word rings a bell to me, and not in a good way, so I tried to relate to him best I could. He didn’t even know how to swim, though. Seriously, what golden retriever can’t swim? My Mom had to get in and save him once after he jumped in the lake all cocky and sure of himself. Good thing she was there, is all I have to say. Anyway, after that they made him wear a life jacket, and let me tell you, he sure looked silly.

I’ll tell you one thing, he sure worshipped my Mom. It was a little embarassing really, I mean I love her too, but have a little common sense. There were quite a few times that he wouldn’t even eat unless she was around. And by this time they were feeding him cheeseburgers, so that was just downright silly to me.

Anyway, one morning Fletchie was having a seizure (talk about a flashback for me), and my Mom took him to the vet, and came home without him. I could smell him on her, but I could also smell the hospital, and something else that I didn’t really care for. More than anything, my Mom smelled sad, but I stayed real close to her to remind her that she still had me, and even though she wouldn’t take me running with her anymore, I forgave her, and I’d try to make her feel happy again, even though I knew she was real sad that Fletchie wasn’t coming home.

So, that’s what I did. I swam, and played and goofed around with the neighbor dogs. Frankly, I did things I wouldn’t normally do, things that are a little beneath my dignity, just to make her smile.  It worked, eventually, because she can’t resist me and my golden retriever ways. Even though I had to act a bit silly sometimes, it was worth it to see my Mom happy again. I guess you all know  by now that I would do pretty much anything for the people I love.