is the first day of the rest of my life. But my story doesn’t start today. It doesn’t even start yesterday, or last week, or last year.

It really starts a long time ago, when I was young. Back then, I lived with people in Oregon. They got me from a breeder and named me Hilo. I had such high hopes and puppy exuberance…I wanted to run and play and chew on anything and everything. I had a lot of energy. The people kept me in a crate a lot of the time. When they let me out, they didn’t take me for walks or give me any training, and they got really mad when ever I chewed something.

As I started growing, it didn’t get much better. My pen got bigger, because I was “huge”, as they said. They also said I was a “very bad dog”. They were probably right, but they never, never took me outside for a walk or anything. They never let me chase a ball, or play, or swim, or have any fun. I stayed in a pen all the time. For a while, they would let me out when they got home, but I was so bored and had so much energy, I would chew things up, and they would get very, very, angry.

They got so mad they hit me, sometimes with things, sometimes with their hands. I didn’t want to chew, but I was just so bored. It was awful staying in that pen all the time. After a while they only let me out to go potty. I’d go outside, and try to take a long time, but they would yell at me to “get inside”, and then I would have to go right back inside my pen.  Just so you know, I am a very tall dog and by the time I was two, I weighed 135 lbs. They fed me a lot, but never let me do anything. I was so bored, I got into a lot of trouble every time I got out. I admit that I destroyed things, but I just had so much energy and no where to get rid of it.

Once, I even chewed through the water line and she got really, really, mad. That’s how I learned that the broom was for a lot more than sweeping.  They told me I was the worst dog ever, and that I should just be “put to sleep”. Not too much later, they loaded me up in the car (FINALLY…A RIDE!!) and drove me to this place where there was a lot of barking and whining and tons of dogs and cats. At first I thought it was play time, but then I heard her say, “He is a destructive chewer, and he can’t be fixed – he needs to be euthanized”.

I didn’t really know what that meant, but I knew she was mad, because that was her mean voice, the one she uses when she hits me. Pretty soon, she just turned around and left, and somebody I’d never seen before put me in a kennel. This one was much bigger than the one at home, but it was loud and scary, and I didn’t know anyone.

After what seemed like forever, but was really only 3 days, they took me out of my kennel, and instead of going outside, I went to a different room. There was this lady in there, and she was sitting on the floor. At first I was afraid of her, but she smelled good…like dogs and cats and the outside. She just sat there and talked to me. She told me I was a good dog, and very handsome, even if I was a little chubby. Pretty soon I decided she wouldn’t hurt me, and I went up to her and let her smell me too. I guess she thought I smelled okay, because she took me outside, and we got in the car and I went to live to a brand new place.

That was where my life really started! How could I have known there were so many fun and wonderful things in this world? I didn’t have to live in a pen any more. I had free run of the house, even when I was unsupervised. I got to go for walks EVERY DAY. I learned to swim, and holy cow, did I love it. My Mom says I am a “total water dog”. I went to off-leash parks, and met other dogs (one time these two dogs called pugs chased me, and it was a little scary, but I ran faster than them, thank goodness). This was back when I was still chubby, but I was losing weight really fast. You know what else? With all that exercise I didn’t have the energy to chew anymore.

Now all I got called was handsome and good dog, and I guess my new name is Lincoln, which I really like. They used to call me “Big Linc” too, but one day I rolled in goose poop, and they started calling me “The Big Stink”, and now I answer to that just as quickly as I answer to Lincoln. It wasn’t long before somebody would say “Hilo”, and it wouldn’t even register. My new life was so good, it sort of canceled out the old one.

Everything was pretty great for the first four years. My mom is a runner, so she took me with her. I was so good I didn’t even have to be on a leash. I didn’t like letting her be on the outside, next to the street, because I wanted to protect her from the cars, but she made me run on the other side. I guess she thought I needed to be protected from the cars too.  I learned that during the summer, if I ran ahead, I could eat the blackberries right off of the vine. We have a lake house, so on the weekends, I could swim as much as I wanted. Some days, I would wake up early and go down to the lake, and just take a dip all by myself.  What a life, is all I could think.

Then I started getting a headache. Pretty soon I was having it all the time. Even when I was swimming. That was pretty odd, because as my Mom said, being in the lake was my “happy place”. Then I started having seizures. I don’t really remember them, I just know I felt pretty scared and I wasn’t sure where I was or who I was with when they were over. Usually the first thing I would realize was that my Mom or Dad was holding me telling me “it’s okay, it’s okay”, I was glad they were talking to me, because I couldn’t see for a while once they were over. One thing for sure was that my headache was getting worse and worse. Not only that, but I was having a really hard time walking, and I was doing odd things. I didn’t like the car anymore, and all of a sudden, it was hard to go up the steps. Plus, that headache was a doozy…I didn’t even want to open my eyes sometimes. By this time, it was 2008, and I had been living with my people for over four years.

My people had been taking me to the vet (who, by the way, I really like) a lot. One day we were there and my Mom started crying. The vet kept saying I had a tumor, and that I was dying. He said there was no real chance that I would live without surgery.  He also said the bad thing was that I would probably only live for 6 months after surgery. My Mom and Dad were real worried that it wouldn’t be fair to me to put me through that for only 6 months of life.  The vet told us that I would have “immediate relief” after the surgery. We went home, and there was a lot of talking, and my Mom spent a lot of time on the computer. She told me she wasn’t ready to just let me die. I don’t know what that meant, but she sure cried a lot, and then pretty soon I was back at the vet, and she left me there. I kept hearing the words “tumor” and “meningioma”, and then pretty soon I went to sleep and when I woke up, my headache was GONE.

Then the only words I remember were “cured” and “miracle” and “encapsulated”. None of those meant anything to me, but they sure seemed to make my Mom and Dad happy. She didn’t cry at all once she got there. I was supposed to stay for a week, but after the first day, I got up and started walking around, even though I still had all these needles and tubes in me. I’m so big, they couldn’t keep me in a cage (thank goodness), so I broke out of the gated area and went for a walkabout around the ER. There were lots and lots of dogs there, and I just wanted to see what was going on. After that, they decided I could come home a lot sooner, and I only had to stay for four days.

I guess I looked sort of funny, because they took lots of pictures. They also talked a lot about me having some “soft spot” because the vet took my skull out. At first they wanted me to wear a helmet (which just seemed silly to me since I felt so good), but the vet told them they had to remember to let me be a dog. Also, my Mom and Dad got some pretty good laughs at what my head would do when I was breathing.  You really have to watch the video to understand. 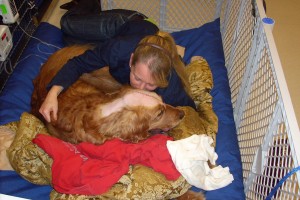 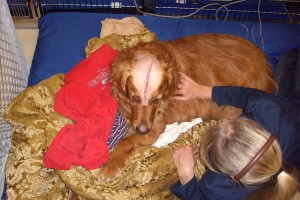 Well, I have a lot more to say, because this is just the beginning of my story, but I’ve already taken up a lot of space, and I don’t even know if anyone will care about what happens. All I can say, is that there has been a lot of things happening, and man, has it been interesting…(To be continued)… 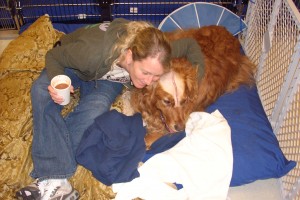